In the previous two posts, we talked a little about why and how we came to spend half a year in Costa Rica with our two boys, aged nine and 12, and touched on the irreplaceable education we all four acquired from this experience.  Here Paul talks about the aftermath.

All good things must end.

We ran out of money in Costa Rica perhaps ten days earlier than we’d planned, and so booked our travel back home around the time of the first few showers of the impending rainy season.  Including our air fare, as well as various tours and admissions, our average cost of living for the entire six months was about half of what it would have been had we stayed home.  Since we’d canceled our lease and put everything in storage, we had few other expenses during that time.  However, there was other financial fallout.

We quickly rented a new home, but before we’d even had the storage containers delivered, we learned that our company had suffered a major crisis in recent days.  My partners had taken the unprecedented step of laying almost everyone off – including themselves, Cheryl and me.  So there we were with a new lease and no jobs.  I won’t say it was easy to recover, but things did work out.  Cheryl, who had been the work-at-home Mom, eventually found a full-time job outside, and she still works there ten years later.  I picked up the slack at my former company by sub-contracting there part time, allowing me to take on more of the at-home parenting role for the next few years.  The company never fully recovered and we wound it down a few years later.

We had originally thought we might buy a house again, but the experience of being mortgage-free – together with our employment uncertainty – had us defer the purchase.  By the time our finances looked better, the real estate market looked overpriced and we stayed out.  We still rent – not a bad thing, as it turned out.

Packing up after our whitewater rafting adventure

Despite all this, Cheryl and I never wavered.  This was one of the best things we ever did for our kids.

Still, I thought I’d best verify this again, and so I asked our two boys, now in their 20s, how they would sum up their experience.  (They had not yet read the earlier blog posts.)

Al, the younger, said emphatically that it was the best thing we’d ever done as a family.  It wasn’t just all those exciting adventures, including all those new animals he “never knew even existed.”  Most important, he said, was just that “time out of time”, when he and the rest of us could escape from the relentless schedule of everyday life, and for a few months, follow our spirits and our curiosity.

Dennis, who was still 11 when we were planning the trip, even wrote me something: 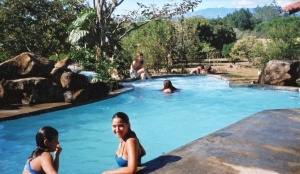 I remember vividly the day my parents told us we would be moving to Costa Rica for six months.  We were walking through our favourite city park when they dropped the bombshell on us.  I remember being pretty upset at first, especially when they said I couldn’t bring my Game Boy.  Fast forward 13 years later, and I can safely say I have absolutely no regrets regarding the trip.  I got to be surrounded by warm weather, awesome animals, cheap delicious food, and learn the Spanish language.  We lived on a farm, in an apartment, in the house of a Costa Rican family, in hotels, motels, inns on the mountain, bungalows by the beach, you name it.  I have dozens of interesting stories to tell from that six-month period, and it was definitely an experience I hope to repeat someday with my own kids.

Whew!  (I hope he still says that after he sees the picture in Part 2.)

Yes, it was worth it.  If you are reading this, and considering creating your own family adventure, and holding back … just go for it.

The beach at Manuel Antonio Park is busier than most we saw – and that means spunky monkeys!

After I’d returned from Costa Rica, with the failing fortunes of our business partnership, I found myself years later confiding in one of my favourite career counselors.  I had the impression that my peers in the high tech industry looked askance at me because I had other interests – because I was willing to put my job on hold for half a year to go traveling with my family.  She told me that, in her experience, many parents work their whole lives, hoping “one day” to be able to do what Cheryl and I had done … and many never do.  It was good hear her acknowledgment.  Since that time, even some of my peers have admitted to taking inspiration from what our family did.  Some have admitted to envy.  Some have even compared me to the

fabled Mexican fisherman in this story.

I was reminded again of my priorities and Cheryl’s when I read “The Top Five Regrets of the Dying”, a short review of a book by the same name.  The author, a palliative nurse who worked with the terminally ill, had made a short list of the things she heard most frequently from those who were running out of time:

Referring to the second point, she went on, “They missed their children’s youth and their partner’s companionship.”

During our family’s six month adventure in Costa Rica, we truly experienced each other’s companionship, our children’s youth – and, truth be known – our own.

What do you want to experience?  What will you miss if you don’t?

3 thoughts on “Back from Costa Rica, into the “Real World””