“And they all moved away from me on the bench…”  Alice’s Restaurant it was not, but rather the dining room on a Rhône river barge.  Through the haze of my technology-induced rage, I sensed our cycling shipmates looking sideways at me.  Cheryl urged me down into the cabin.  As Betsy Talbot of MarriedWithLuggage.com has advised, when traveling as a couple, only one partner at a time can have a meltdown.  This one was mine.

For the past half hour, I’d been fighting Cheryl’s tablet computer, trying to navigate the website of the French national railway SCNF to find a train stop closer to some suburb of Avignon that I’d never heard of.  The technology was winning.  Apart from my not knowing how to approach the route question, the web site kept timing out, and my fingers were struggling with the touch-screen keypad.

Two of our cycling group ponder the Roman aqueduct at Pont du Gard, a short distance from Arles.

The sun was now warming our cycling days, but the rains of earlier in the week had now swollen the Rhône to the point where authorities had halted all passenger boats.  Our accommodation and transport were stuck in Arles – a wonderful place to be stuck, but stuck nonetheless.  A day and a half later, our most generous Couchsurfing hosts from the Avignon area had promised to meet us at the pier near the Phillipe-le-Bel tower.  Now we had to do something involving trains instead of ships, and I was determined not to make it their problem to plan our route change or to drive even farther to pick us up.  Hence my doomed attempt to find a train station closer to their home.  I felt I had to do it quickly, since our only communication channel was the Couchsurfing website, and time was running out

Cheryl in her current role as the non-meltdown partner suggested I settle for telling our hosts we’d be at the Avignon main station and leave it to them to suggest any alternative.  Obviously, she was right.  In the end, that’s just what happened.  They met us at the station entrance, and we enjoyed two wonderful days of French food and conversation – relaxing and sightseeing in Provence with two wonderful people. 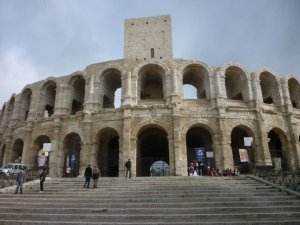 The Roman amphitheater in Arles is now used for Provence-style “bloodless” bullfights.

The episode with the tablet started us thinking it was time to update our relationship to technology.  If we were to be traveling longer and more often, we would need this kind of last minute planning to be easier.  There are better uses for travel meltdowns.

Having written my first computer program in the late 60s – and still coaxing computers for a living – I should be versed in all the latest gadgets.  However, with Cheryl and me both in long computer careers, we’d made a conscious decision to govern the rate at which electronics entered our family life.  We never had cable TV and we still don’t.  For years, the family had a “screen-free” day every weekend.  We resisted cellphones until we could no longer find a payphone, and even now, we often carry them switched off.  We don’t value being contactable 7×24.  We spent many summer holidays with our boys at an off-grid island cottage, and I left “Search and Rescue” as my contact info for the office.  It worked for us!  You might call us Technology Late Adopters – and only when we think the technology in question enhances our quality of life.

Meanwhile, technology for travel was undergoing a transformation.  In the 70s, the only technology I needed was how to find the metal fiches for the payphones in Europe or South America.  When our family traveled in Costa Rica for half a year in 2000, spending an hour a week in a crowded and sluggish Internet cafe was about it.  Asking directions used to be one way to interact with residents with traveling, and maybe practice some Spanish.  On recent trips, however, people just started telling us to Google it. “No lo sé. Búscalo en Google.”

The famous Pont d’Avignon.  Our Couchsurfing hosts explained that the dancing was under not on the bridge.

We’ve been using the Internet extensively to plan and research our travel for the past 15 years, but it looked like it was time to consciously accelerate our entry into the wireless age.  Marital harmony required it.

(In our second half of this post, “Travel Technology for Late Adopters”, we’ll talk about the wireless technology that works for us, while we continue the good fight against the growing tendency to be “over-available”.)