No, I’m not talking about the theme of the upcoming movie with Johnny Depp.

Here’s the meaning I’m focused on.  “Transcendence: the state of excelling or surpassing or going beyond or exceeding usual limits, the act of rising above something to a superior state, extending or lying beyond the limits of ordinary experience.”  It’s somewhat relate to “transformation: a marked change in appearance or character, especially one for the better.”

I’ve been struggling with the attempt to establish a new “retirement friendly” career, and falling short of my expectations.  Some of the most interesting research I’ve done during this struggle has led me to the websites of coaches who claim that the kind of “career reinvention” I’m looking for will require of me a transformation – to transcend my current limits and experience. 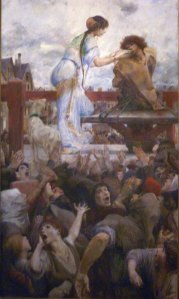 The transcendence of Esmeralda & Quasimodo – from Victor Hugo’s place in Paris, France.

For instance, prosperity coach Steve Chandler stresses the need to “choose transformation over information.”  Dane Maxwell and Andy Drish at The Foundation – a startup coaching school – talk about the need for a wannabe entrepreneurs to shift their identity by altering long-held beliefs.

This is both good and bad news.  On the one hand, how hard can it be to change my self-limiting beliefs?  On the other hand, as the definition suggests, this transcendence involves moving to a state “lying beyond the ordinary range of perception, beyond comprehension.”  That seems a tall order.

So, I find myself asking, is transcendence possible?

While contemplating this, I chanced to think about how I was as a young person, during my high school years.  Were there beliefs and attitudes I transcended?

In my youth – in fact, until I was in my thirties – I was convinced that I would never be a father.  I had no interest in children, and none whatsoever in parenting.  This was a done deal as far as I was concerned.  Some people would have children; I would not.  I was so sure that I even asked to have a vasectomy at the University medical centre – they didn’t make it easy, and fortunately I didn’t pursue it.

The transcendence of a different era. Assyrian human-headed winged lion (lamassu), 883–859 BC (Louvre)

I’m not sure just what led to my change of heart.  Perhaps it was just meeting the right woman.  Or maybe I saw that underneath that man committed to childlessness was a father wanting to burst forth.  Whatever the cause, from where I now stand, fatherhood is one of the signature accomplishments of my life.  I can’t imagine my life any other way.

I transcended my beliefs of forty years ago.

I can actually find many such examples if I choose to look for them.  I was a “math nerd” when I was in school – other kids used to tease me by calling me “The Physical Einstein.”  The emphasis was on the “physical”: I was someone who flunked Phys Ed.  My interest was in book learning, and if you’d told me that two decades later I’d place in a State Masters Swimming event for the butterfly, I have thought you were crazy.  But I did.  Now, in my sixties, I think little of doing a sixty-mile bike ride, or a fifteen-mile hike in the mountains.  I’m in better shape than I was five years ago, and definitely in above-average condition for my age.  What’s more, this didn’t happen by accident, but from strong commitment over many years.  Another example of transcendence?

At the gun range: something else I thought I’d never do

“The Physical Einstein” also hated languages, starting with an excruciating French class in Grade 5, and continuing through years of just squeaking by language exams in high school.  Yet a dozen years after that first hateful exposure, a new way of looking at language learning had me fall in love with the process and become fluent in several.

So perhaps transcendence is possible?

Yet I continue to feel and act is if it’s not.  Reinventing myself career-wise seems to lie “beyond the ordinary range of perception, beyond comprehension.”  Not surprising that something beyond perception and comprehension should be elusive.

But a more detached view, one informed by the experience of over six decades, might suggest a hint of irrationality in my current position.  So I’ve decided to view it as a form of insanity.

“To recognize one’s own insanity is, of course, the arising of sanity, the beginning of healing and transcendence.” ― Eckhart Tolle, A New Earth: Awakening to Your Life’s Purpose

Sounds good to me.

A solemn yet heartfelt declaration of insanity

6 thoughts on “Transcendence, … or Insanity”