In sailing terms, kedging is the process of moving a ship forward by sending an anchor out ahead of it, and then pulling the ship forward by hauling on the anchor. This slow and laborious process can be repeated indefinitely.

“Younger Next Year: Live Strong, Fit, and Sexy – Until You’re 80 and Beyond”

As the book “Younger Next Year” explains, the same process can be used to pull yourself through the slow and laborious process of a daily exercise regime. The idea is to set a physical stretch goal that will keep you moving forward when the couch is softly calling.

Last year, I had used our upcoming fall cycling trip to the hilly Dalmatian Islands as my kedge, and the thought of those climbs got me out riding our local hills on many a summer’s day.

This year, I elected to participate in a late-August two-day bicycle ride to raise funds for cancer research. However, the real fun began when I elected the optional “challenge” route of 290 km (180 miles.) The longer Day One would be close to double the longest ride I’d ever done.

As I started my training rides, I soon realized that my trusty hybrid cycle was not up to the task. At a top average speed of perhaps 22 kph, I’d be at risk of not finishing before dark. I also wanted to join the local road-riding club for extra weekly motivation, and they had a “no hybrids” policy. So, in April, I acquired an entry-level road bike, the first since my 20s. Shortly after that, I persuaded myself to try “clipless pedals” – so called because the cyclist’s shoes are clipped into the pedals – go figure!

As anyone who’s had their feet attached to the pedals can tell you, a few slow-motion falls are to be expected, especially on days with high cross winds. It hurts a lot less if you land on flat ground rather than a roadside planter. Ouch! 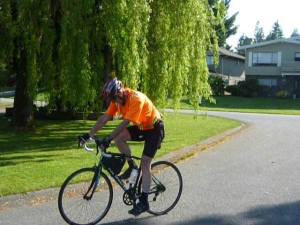 Trying out the new “clipless” pedals

As spring headed towards summer and I worked my way towards 225 km a week, I inched my average ride speed from 22 to 24, then 25, and finally 27 kph. That was the point I’d told myself I’d be ready to join my first group ride. An informal ride was advertised for Tuesday morning: “Pensioners’ Easy Ride.” That sounded good.

I arrived at the meeting point with a slightly bloodied knee – remember those cross winds? The collection of sleek carbon-fiber machines looked intimidating, and some of those “pensioners” must have taken very early retirement. For 20 km, I managed to keep them in sight – although it nearly cost me a lung – after which, they disappeared from view. At the end-of-route coffee stop, they gently suggested the “other” club might be closer to my speed.

Towards the end of the summer, I did manage to get out with the “other” club a few times, and while the rides kept me moving, I was able to hold my own. Good thing! I had my hands full learning the hand signals and other techniques for riding in close formation. This was a very different style of riding than what we do in our recreational club, and I came back from a few “white knuckle” rides with aching fingers. 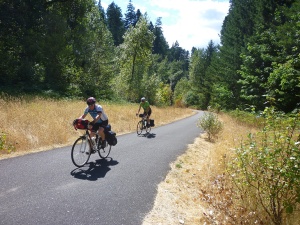 Fellow riders on the bike trail into Cascade Locks, OR

Meanwhile, our recreational club kept Cheryl and me busy this summer with a number of great rides including a three-day circuit of Oregon’s Columbia Gorge, a multi-day exploration of the BC wine country around Oliver, and a couple days of riding on Washington’s Whidbey and BC’s Pender Island. I knew my training was starting to have an effect when fellow riders remarked on how my hill climbing had improved, and sometimes complained that my “easy” pace seemed to be quickening.

Despite all this, by August I was growing concerned that I still hadn’t proven to my own satisfaction that I could do the ride at month end. So I pushed myself to do longer rides, and ten days ago, I completed my longest ride ever. Although I was still only at 75 percent of Day One, I knew I still had the reserves to do that last 25 percent — and before sunset to boot. Not a moment too soon, as our training advisors soon told us it was time to taper down for event day.

Now, with the ride only a few days off, the kedge has done its work. It got me out cycling on the days I otherwise wouldn’t: when it was too hot, or sprinkling, or when my road bike needed repairs and I needed to take my hybrid. It got me out earlier, later, and longer. My attitude towards hills shifted from “OK, if I have to” to “Bring’ em on – I need the practice!” A 70-km cycle went from being a full-day’s outing to a shorter morning ride.

Cycling Friends, on the ferry to Lummi Is, WA

It got me trying new things such as close-formation riding on a new type of bicycle. I met a whole new set of people I wouldn’t have found otherwise. And it kept me focused on my goal while dealing with a number of mechanical problems such as bent derailleurs, broken spokes, and the need to replace a wheel. And ergonomic problems – I had to hire a bike fitter to implement the recommendations of my physiotherapist. It’s definitely helped my fitness, including loosening a couple of joints that had been over-tight since last October.

This particular kedge has also done something else. It’s allowed me to raise several thousand dollars towards cancer research. For many riders, the fundraising part is the hardest – and many struggle with it. In my case, a number of generous friends, associates, and family members made the job painless. All I had to do was keep them entertained with my painful cycling pratfalls. 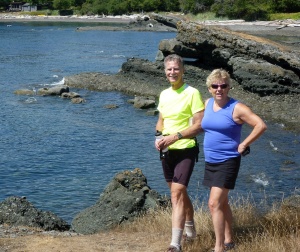 Taking a break from cycling on Pender Island, BC

With only a few days left, I’m looking forward to my weekend ride – forecasts of showers notwithstanding – and already wondering what my next kedge will be. While Cheryl and I plan a 400-km cycling trip in Vietnam early next year, it doesn’t seem solid enough for the purpose. So, I’ll have to come with something else. Stay tuned. I’m off for an evening training ride.

What experience have you had with your own kedges?

It was a different kind of travel these past months.

In January, I reported that I was transitioning to “advancement” a.k.a. retirement.

The transition has gone according to plan, … mostly.

Cheryl’s resolve to go on working was thwarted by a meltdown at her employer. In March she resigned, and is now looking for a year-long contract. Despite the unexpected tightening of finances, I’ve been fairly good at not abandoning my Declaration of Self-Actualization in favour of going back to work. I wish Cheryl could join me in this new endeavour, but for now, she’s committed to being a working woman. 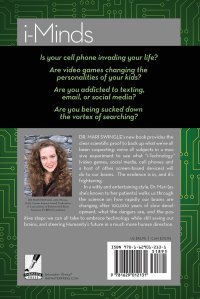 You may recall that my transition was to have three distinct phases: Endings, the “Neutral Zone”, and the New Beginning.

My journey through the “Neutral Zone” was interesting. Limiting Internet usage to four evenings a week proved highly challenging – life is so Internet-centric these days! But I mostly succeeded, and it gave me a new sense of freedom, not to mention more time. Among the many books I read was “i-Minds: How Cell Phones, Computers, Gaming, and Social Media Are Changing Our Brains, Our Behaviour, and the Evolution of Our Species.” It definitely added to my rationale for taming the iBeast.

For the last five days of my Neutral-Zone period, I engaged in a “mostly silent” retreat at the seaside Krishnamurti Centre of Canada in rural Metchosin, BC. I knew nothing about Jiddu Krishnamurti before I went, and chose the location primarily as it offered a nearby opportunity to spend some time in contemplation. I spent most of the time strolling in the gardens or on the beach, or contemplating views like this one. However, I did read one of Krishnamurti’s shorter books, and found his stuff intriguing. Somehow I’d missed him in the 60s.

View from the Krishnamurti Centre of Canada in Metchosin, BC

I returned from my retreat energized and at peace; work was a distant memory so the “Endings” were done. I was ready to leap into the New Beginning. An opportunity for a jump start presented itself in the form a weekend “New Warrior Training Adventure”, run by the ManKind Project as a “modern male initiation.” And that it was! I returned from the weekend part of a new community and ready to take on the next stage of my “advancement.”

I’m happy to say that I’ve started my 3rd Act Career – although there may be no money in it, … or not for a long while. I’ve started a practice of working every day on writing a novel, something I’ve wanted to do for years. On an author friend’s recommendation, I began with the system outlined in “Writing a Book in 30 Days: A 60-Minute Masterclass.” At my current rate of progress, I’m estimating 30 months will be barely sufficient. But I’m having a lot of fun. My nascent plot spans three continents, so Cheryl and I are both looking forward to the location research projects.

Since my writing muscles are now engaged daily, I’ll likely limit future posts this year to travel reports. While we decided to postpone any overseas travel until next year, we have a pretty full schedule of outdoor activities closer to home. This month, we’ll be hiking in Utah, and cycling some of Washington State’s coastal islands. Stay tuned!

Cycling will be a big part of this year’s activities. For my “kedge”, I’ve signed on to do the two-day 175-mile loop of the local Ride to Conquer Cancer. Since Day One will exceed my longest-ever ride by about 80%, I’ve to a lot of training to do. I’m out at least three days a week, and expect that to rise as the August ride date approaches. I’ve invested in a faster bike so I can ride with a local club later this season.

Cycling in the Valley with the Outdoor Association

While my novel file is growing and my average cycling speed is creeping upwards, a few of my other projects stalled. When the decluttering was about 30% done, we realized we weren’t likely to downsize this year, and put the project on hold pending the autumn rains. On the training side, I managed to pass only one of my two assessments, leaving the other to be rescheduled during those same autumn rains.

For now, the weather is great for some beautiful spring rides. 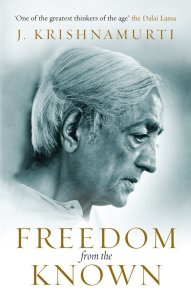 “Freedom from the Known” by Jiddu Krishnamurti