I’m sitting here this morning listening to Andrea Bocelli sing the exquisite “Sancta Maria” from Pietro Mascagni’s famous opera, “Cavalleria rusticana”. It’s one of a handful of CDs and photographs we carried away from an out-of-town family reunion, brought together for the memorial for Cheryl’s Mom, Anne, who passed away last month.

As she had in life, Anne continued to bring together her extended family. We spent the three days renewing old acquaintances and making new ones, talking about old times we knew about, and many we could only imagine. Prior to the gathering, we had put considerable effort into digging up old photos, piecing together Anne’s family history, which seemed shrouded in 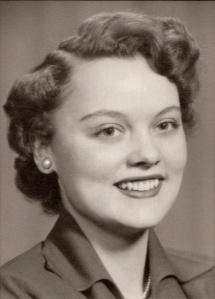 Grandma-to-be in her 20s

mystery. Like many in her era, she didn’t talk much about her often-challenging past, and like so many in our era, we didn’t think to ask about it … until it was too late.

I – and even Cheryl – didn’t get to know Anne well until she lost her husband about twenty years ago. Perhaps the two of them had “lived in each other’s shadows” for her widowhood propelled Anne into a series of new adventures: traveling solo and striking up conversations with unlikely strangers, enrolling in self-development workshops, and, of course, visiting us more frequently (all despite her fear of flying.)

It was also during this time that Grandma joined us for a spell during our half-year in Costa Rica. She and two friends toured some of the back roads with us, sleeping uncomplainingly in bug-infested mountain shelters that let the light through the walls. I recall one night when we stood on a barely cooled lava flow of Mt. Arenal, watching and listening to orange-red rocks tumble toward us from the glowing peak. I could tell that she was nervous, but she wasn’t going to let that get in the way of a good adventure. 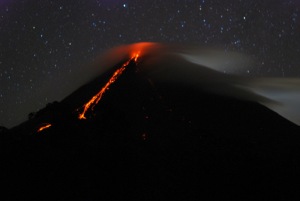 Mount Arenal at night (This was the 2008 eruption.)

Our two boys, now young men, had nominated Anne as “best grandma ever”. When they were still too young to fly alone, they began a practice of each visiting Grandma for a solo week every summer. They must have been good times as both boys continued these annual visits well into their late teens – at least one of them had his first legal drink courtesy of Grandma. (The drinking age was lower where she lived.) More so than the boys’ parents, Grandma was game for the kinds of restaurants and movies that teenaged boys appreciated: Star Wars, the Matrix, Bruce Lee, and who knows what else. They drove her golf cart and probably lived in a junk food heaven.

Grandma also collected her extended family on other occasions. In the late 90s, she discovered Maui. The occasion of her discovery was not a happy one: the favourite aunt who’d invited her passed away while out in the surf. We were quite surprised when Anne elected to return to the same condo the following year,… and included all of us: kids, spouses, and grandkids. “Do you mind that I’m spending your inheritance?” she’d ask Cheryl. No one objected. 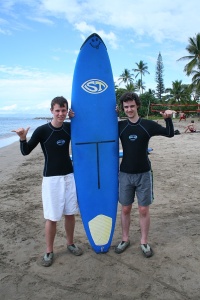 The last time Grandma took us to Maui

She did this twice more over the ensuing years, hooking the family on Hawaii forever. One of our boys talks of moving there, and both of them were quite happy to join the reunion a couple of years ago, which Grandma was unfortunately not well enough to enjoy. I suspect that Maui will be a spot of choice for future family reunions.

Anne was also a thoughtful conversationalist, well read, and interested in many subjects. Always when we saw each other, she and I would start conversations about politics, or demographics, or religious fundamentalism – and then continue them for months afterwards by email. While she held strong opinions, she was always open to persuasion by a good argument.

As for her opinion of me, her son-in-law, I’d say that once she’d sized me up and decided I would be good for her daughter, she was content to trust us, and never interfered in our lives. This sizing up took place quite quickly, thirty years back, and she’d reached this conclusion despite the fact I’d appeared out of nowhere, had not yet officially divorced my ex, and Cheryl and I had just applied to immigrate to Australia. I’d like to think Anne was a good judge of character: she was “no nonsense” and would size people up quickly. She also knew that “hands off” was the best policy once her kids had left the nest: a good example for Cheryl and me with ours. 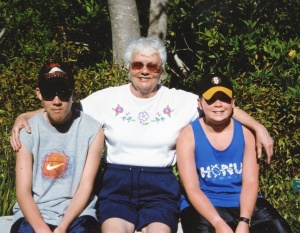 One of our earlier visits

Whatever challenges Anne may have had in her early life, she continued to have quite a few in her later years. Her husband died young. Several members of her immediate family became increasingly ill in their later years, and relied on Anne for daily care. By the time the last of them had passed away, she was exhausted. And determined never to set foot in a hospital again. Unfortunately, it was not to be.

Like Mascagni’s sacred aria “Saint Mary”, which comes from an opera about seduction, revenge & adultery, Anne had her contradictions. Despite her generally healthy lifestyle, she was a lifelong smoker, and in the last few years, it caught up with her. Her declining health pushed her away from the activities she loved: golf, championship bridge, and time with friends. As she weakened, she resisted suggestions to move into an assisted living complex, … until it was too late, and she landed in a hospital ward instead. Over the next couple of years she bounced back and forth between the hospital and a senior’s complex. It took a toll on her “can do” attitude, and affected her family as well. 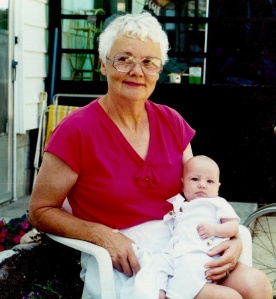 Grandma with our niece

The last time I saw Grandma, she had made it out to visit us at Thanksgiving. She and I were discussing the idea of cohouseholding, one of the themes of this blog that Cheryl and I are investigating for our retirement. Anne turned to me and said, “You know, Paul, here’s what I wish I’d done 15 years ago. I wished I’d gotten together two or three of my widowed friends, and all moved into a big house together. I wouldn’t be in the condition I’m in today.” I had to agree.

In preparing for Grandma’s memorial service, I learned things I’d never known about the impact she’d had on our boys. One of them, now a producer of marketing videos, put together the DVD for the celebration of her life. He was relating to me one of his favourite memories about Grandma, one that was unfamiliar to me.

At the time, he was 12 and Grandma was traveling with us in Costa Rica. We were on a tour of a number of smaller locations around the country. All the arrangements for these two weeks had been made by our guide and driver, Alexander. This particular day, we were staying at a hotel run by an expat who thought himself above the “help”. He had put Alex in the “servant’s 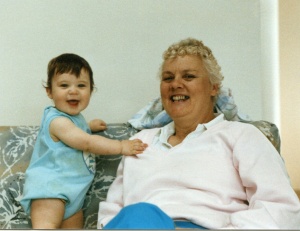 quarters” and hadn’t invited him to join us for meals. My son told me that Grandma would have none of that. She insisted that Alex be treated as part of the group, … or else, … and offered to pay extra if necessary. She must have had her way because Alex ate with us for every meal.

Clearly this had a deep impact on my son, and he clearly still sails by her sense of fairness a dozen years later. Such is the impact that the “world’s best grandma” can have.

When and if our turn comes, may we rise to the task.

PS. Here’s a link to my post about my own Mom.