Paul has been reflecting on what he likes so much about travel – about being in “vacation mode”.  He’s not one to sit around the pool with a margarita, but can usually be found on an all-day walking tour, or working on a new foreign language.  He observed that his favourite principles of good vacations apply just as well to “everyday life at home” – although we don’t always remember them:

Paul’s not above trying the local beer, however.

Ah, to live life in vacation mode every day!  What does it take?

I explored the texture of that question on a recent trip to Mexico’s Yucatan Peninsula.

For sun-chair reading, I’d packed a copy of Jill Bolte Taylor’s My Stroke of Insight.  Neuroscientist Dr. Jill reports “from the inside” what it felt like when a massive stroke shut down the left side of her brain, and put the right side in charge.  As I understand it, the left brain manages linear reasoning and language functions;  the right brain fills a more intuitive, holistic role.  In Dr. Jill’s case, for the first eight months of her eight-year recovery, the “little voice” in her head fell silent.  Imagine!  She used her experience to reflect upon her life in general, and in particular, the relationship between her two different aspects.

Dr. Jill observed that “vacation mode” derives from the right brain.  So simple, I mused?  The question hovered over me like an iridescent Yucatan hummingbird.  Meanwhile, I did the usual holiday things.

Even plain, the best tortillas ever!

One of my travel activities has me strike up conversations with strangers for no reason.  I dusted off my knowledge of Spanish, German and Portuguese to talk to almost anyone I found myself next to, even tried to learn a little Mayan.  Bix a bel, tz’unu’un!  What’s up, Little Hummingbird?  Yet my wife and I both found it hard to start conversations at the resort.  Our fellow vacationers seemed reluctant to connect, as if locked in their tour buses with the windows up.  I felt frustrated.  After this mood settled over me, something startling took place.

En route to climb the great Mayan pyramid at Cobá, we pulled of the road at a corner store in one of the small towns that crouch in the Yucatan interior.  We squeezed in to harvest a few nuts and chicharrones to stave of the need for a tourist-priced lunch.

I plopped a couple of bags of munchies near the cash register, while we continued to hunt for more.  Just then, a small Mayan girl of six or seven came in, chose a bag of the pork-rind snacks and took them to the cashier.  As we arrived at the counter with the rest of our purchases, I saw the store owner already totaling our bill.  The young girl stood waiting.  I sensed him directing preferential treatment toward us “gringo elders”

In my most sophisticated Spanish, I explained that she had preceded us, and that he should look after her first.  Alas, my linguistic abilities failed me.  After a couple of failed attempts followed by puzzled looks, he asked me if I meant to pay for the young girl’s purchase.  Annoyed that my communication attempt had gone so completely wrong, I shook my head and replied, “No, no!  That’s not what I was trying to say.”  Chastened into silence, I let him continue with our order, and we left the store.

While we poked around decaying ruins that afternoon, however, I had my own “micro stroke of insight.”  I saw that I had at least two valid answers to the store owner’s question, “Do you want to pay for hers too?”

My “right-wrong” linear left brain had jumped in and taken control of the situation in the store.  “No, that’s wrong.  That’s not what I was trying to say.”  End of story.

Yet his question had another valid answer, one that my less linguistically adept right brain could only whisper on a quiet trail in a Mayan jungle.  Did I want to spend sixty cents to buy chips for a cute kid who looked as if sixty cents mattered?  Did I crave a chance to make the tiniest human connection, no matter how fleeting?  Yes. I did!  Yes, I had!  Yes, I would have!  And then a wave of sadness and disappointment flooded my soul concerning opportunity missed – not just this one, but for all the little missed opportunities of a lifetime. 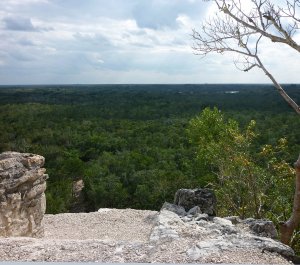 Jungle-clad Cobá from the top of its pyramid

Fresh from Dr. Jill’s book, I supplied mental hemispheric interpretation to the event.  My number one priority on this holiday involved connecting to people, just because – I thought that a right-brain function.  Yet I’d let my linear left brain run the whole show with its need to get the Spanish right.

This reflection troubled me.  My troubling in turn shocked me.  My own stroke of insight had allowed me to glimpse how my left brain’s reaction had drowned out my right brain’s voice, leaving my life just a little less rich.  A single thread dropped from an intricate Mayan blanket.  Even after returning from Mexico, I kept brooding.  Intrigued that such a trivial event had bothered me for days, I pulled at the loose thread.

How often had I missed an opportunity like this one because I didn’t want to get something wrong?  Ba’ax ka wa’alik?  Hell-o?  Now I see how many threads I’ve dropped in the tapestry of my life. It’s a good blanket regardless and it keeps me warm, but my stroke of insight showed me that I could weave it even warmer, more colourful.  Sometimes I hush my left brain’s chatter, listening for a second right answer, a fleeting chance to make the human connection, just because.

I’ve watched myself drop a few more stitches since then.  Sometimes I’ve gone back and picked them up again.  I look forward to catching more before the tapestry runs out.  The colours brighten.

Speaking of vacation mode, here’s another lounge lizard from around the pool

What’s “vacation mode” mean for you?