We didn’t win in Las Vegas, but we came up lucky while hiking in Utah.

Friends Darcy and Marty had planned a return visit to some of the areas they’d visited years before, and asked us to come along. Since Cheryl had no new contracts pending, we took up their offer at the last minute; one of the perks of the “No Pension Will Travel” lifestyle.

The expected view from our first destination.

We flew discount airline Allegiant from Bellingham to Las Vegas. Their prices are low, but watch those extras. The default seating arrangement appears to ensure that couples are not together, and there’s an “upgrade” charge to move even one seat over. The rumoured fee to use the toilet was hyperbole.

We arrived in Vegas in the late evening, giving us just enough time for a driving tour of The Strip. This was mainly for my benefit, as the other three had each been to Vegas several times before. I remarked how much Las Vegas resembled a “Disneyland for Adults.” However, I missed my chance to thwart the one-armed bandits; early next day, we headed out for the three-hour drive to Kanab, Utah, planning a stop in Zion National Park for a hike up to Observation Point.

Part way up, Cheryl contemplates the remainder of the ascent to Observation Point.

I’d been wondering what Darcy had in store for us. About my age (and just as young looking), Darcy had recently run the Boston Marathon, and won her age group in a local half-marathon. She isn’t known for shirking a challenge. As a less experienced hiker, I thought I’d check out some of the hazards of hiking in Utah. Rattlesnakes, perhaps? Yes, there are some, but some of the biggest dangers are falls, dehydration, and flash floods. All can be mitigated with careful planning. And, as with most travel, driving is probably the top risk. 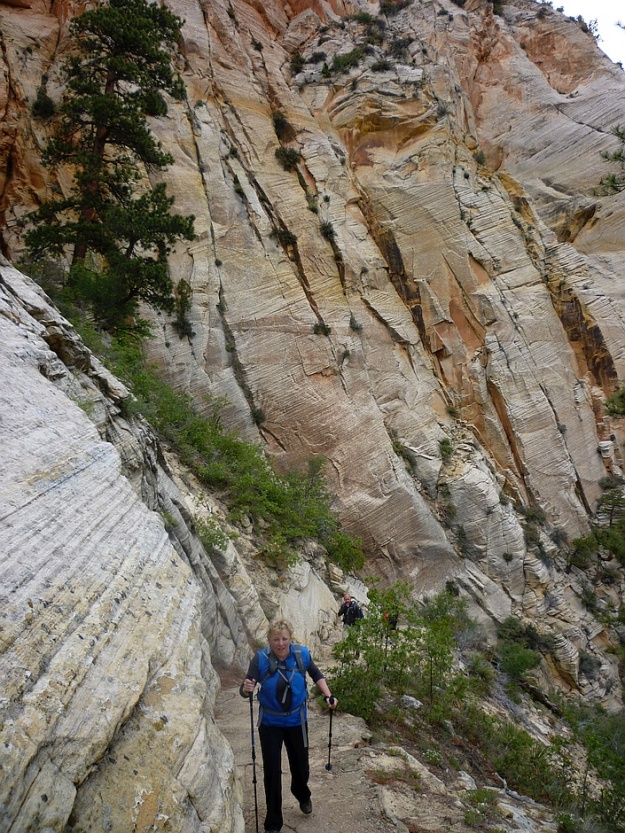 Much of the ascent to Observation Point looks like this.

I did see that Angels Landing in Zion had made it onto at least one list of “20 Most Dangerous Hikes.” Then I learned that Darcy had done that hike last time. “Observation Point is easy by comparison,” she said, although I wondered about “easy by comparison.” It’s an eight-mile round trip, with 2100 feet of elevation gain, the endpoint looking down on Angels Landing. The footing is smooth, making it doable if you’re used to those kinds of distances; we made the return journey in well under the suggested time of five hours.

May was a great time to see wildflowers on all four of our Utah hikes.

This was Cheryl’s first hike since recovering from a running injury, so she was monitoring her body’s reactions to the climb and descent. Happy to say, it went well, although her legs complained to her the next day about the shock therapy.

I’m prone to vertigo – it’s a family trait – and there was about 20 minutes of uphill and about 45 on the return, when I found myself hugging the cliff side. The ledge was probably four or five feet wide at this point; most people wouldn’t be bothered. Still, I kept a watchful eye on the weather. I wouldn’t have enjoyed coming down during a blustery rain storm, and the rangers were divided on whether it would rain again before it cleared that evening. Lucky for us, the clouds began to lift, and we had only expansive views to contend with.

This little guy joined us for lunch. We also saw mule deer and wild turkeys in Zion.

Our home base in Kanab was the funky Parry Lodge, on the National Register of Historic Places. The rooms and lobby are plastered with photos of the many stars who came here to film westerns, mostly from the 30s through the 60s. With reasonable prices – about half of those charged in other areas around Zion – the Lodge was fully booked every night. The service was friendly, and even included packing us five-dollar box lunches that were big enough to share. It’s a busy kitchen, so if you have special dietary requirements for your hike, it’s best to write them out beforehand.

Watching our step, heading down from Observation Point.

The next morning, we headed over to the BLM office in Kanab to do some gambling. We really wanted to do the hike into “The Wave”, in the North Coyote Buttes which straddle the Utah-Arizona border. It’s a popular destination, but permits are limited to 20 people a day. Ten of those are awarded via a lottery the day before. With about 200 people a day applying, our odds weren’t good. Our backup plan was to do a hike in Bryce Canyon. On this day, about 45 separate parties entered the draw, from as far away as Germany, China, Saudi Arabia, and Australia. The ranger read out the

names, origins, and ball assignments. I wished aloud for my lucky number, 13, and we thought it a good omen when we were assigned that ball. The packed hall fell silent as the hopper was spun. I wondered what we’d do if we only won spots for half our party, but Cheryl refused to speculate. Then, the first ball out was lucky 13 and we whooped and hollered like Vegas winners. The ten chosen hikers stayed behind to get maps and detailed instructions on how to find “The Wave” tomorrow. We learned that hikers occasionally failed to find it, and many get off the trail while returning. So, listen up!

These campers returned the next day to find Wahweap Wash dry no more.

For today, with flash floods possible, we decided to avoid Buckskin Gulch, and instead headed out for Wahweap Hoodoos near the tiny town of Bigwater. There we were reminded of the need to stay vigilant. Leaving the parking lot, and crossing Wahweap Wash – now running with snow melt from Bryce Canyon – we thought the instructions and trail map straightforward. But as the morning wore on, we began to wonder if we’d made a wrong turn. Eventually, we reached an abrupt end of the wash – and no hoodoos in sight. Turning around and retracing our steps, we spent much of the time speculating on various places we might have made a wrong turn. We had a good laugh, when, about 100 yards from the trailhead, we saw the signs we’d missed directing hikers up Wahweap Wash. We had, instead, gone up Nipple Creek. It was a good lesson for tomorrow if we weren’t also to miss “The Wave.”

This hoodoo-like peak is as close as we got to the Wahweap Hoodoos.

We consoled ourselves with a stop at the Toadstool Hoodoos, an easy few minutes from the highway. Marty thought there were fewer hoodoos at Toadstool than he’d remembered, and we speculated on whether erosion or human agents were to blame. We later learned there has been vandalism in some of Utah’s hoodoo sites. What a shame!

The approach to Toadstool Hoodoos was picturesque.

We dined that evening at Escobar’s Mexican Restaurant, where copious good food is served with ample good cheer. It’s a small place, and popular, so waits are likely. Bellies stuffed, we returned to Parry’s Lodge to dream of “The Wave” – with the occasional nightmare about failing to find it. 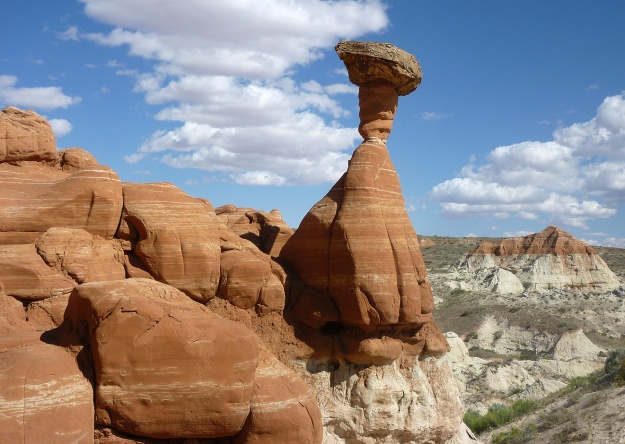 One of the Toadstool Hoodoos looks precarious.

Next up: Hiking “The Wave” 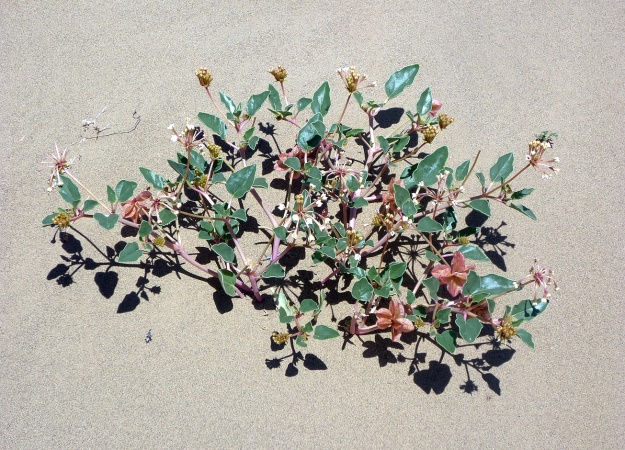 With so much to see, it was hard to remember to look down, but there were flowers everywhere.

Almost everything seemed to be in bloom.